Researchers to Prove Snapper Populations Plentiful in the Gulf

Blaming a lack of fish for an unsuccessful fishing trip might no longer be an excuse for recreational anglers fishing... 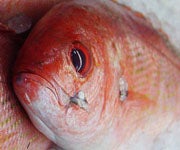 Blaming a lack of fish for an unsuccessful fishing trip might no longer be an excuse for recreational anglers fishing off the Alabama coast. Researchers from the University of South Alabama are conducting a study on the red snapper populations in the Gulf of Mexico, and they believe that snapper stocks could be more plentiful than previously estimated, according to Lone Star Outdoor News.

The researchers are using an underwater camera mounted on a remotely operated vehicle to investigate the impacts of the red snapper season on public fishing spots. They will be looking at the overall health of the fish stocks and how well they fare at the end of the 40-day season, which opened on June 1.

“We’re using video and regular hook and line to sample these reefs now before the season opens. When the season is over, we’ll come and sample them all again to see what kind of impact this very short season has. We’ll see if they’ve been cleaned off or whether they are in good shape and can stand a little more pressure,” Bob Shipp, head of Marine Sciences at the University of South Alabama, told Lone Star Outdoor News.

Guiding the ROV around an artificial reef built in the 1990s by placing obsolete tanks into the waters off the Alabama coast, Shipp and his students watched as snapper after snapper approached the machine before swimming away in search of food. Captain Mike Thierry, who has been guiding scientists in these waters for the past 20 years, says the action above the water’s surface doesn’t always translate to what’s happening in the wrecks.

“One time today my fish finder was lit up with fish and we weren’t catching many,” Thierry told Lonestar Outdoor News. “Then we dropped the camera down and sure enough they were there.”

Shipp said they are sampling public reefs because anglers have easy access to them. He said he has not found anything of concern so far; even in tanks that have been identified as possible sources of diseased fish after the Deepwater Horizon oil spill. He also said his recent trip in the Gulf showed more signs that there is an abundance of red snapper along the Gulf coasts.