Charlotte Smith, her boyfriend, and the two co-captains aboard the Ikaika Kai are nursing sore muscles and cramped hands after... 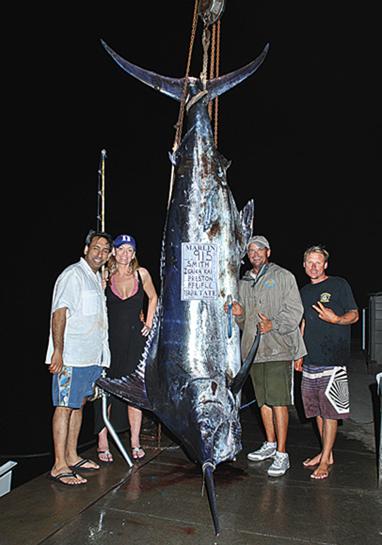 Charlotte Smith, her boyfriend, and the two co-captains aboard the Ikaika Kai are nursing sore muscles and cramped hands after landing a 915-pound blue marlin off the Palaoa Point Lighthouse on the southwest corner of Lanai, Hawaii.

Charlotte fought the marlin for two and a half hours, before her boyfriend, Atule Madan, and Captains Neil Preston and Kamal Pfeifle relieved her. They spent the rest of the time struggling to crank the dead fish up.

The spirited marlin refused to make it easy on the anglers. After circling the boat methodically for the last half hour of its battle with Smith, it suddenly dove 300-400 yards straight down and died, according to the Lahaina News.

Preston strapped himself in, stopped the fish from sinking any further down, and began the arduous process of reeling the marlin up. There was so much pressure on the line that the rod bent over the stern. After 10 minutes, the bolts holding the chair’s gimbal in place broke from the strain.

Pfiefle and Madan came to his aid. It took all three of them to carefully move the rod to the gunnel without snapping the line.

The experienced anglers used what the Lahaina News calls the, “Portugues pull,” essentially pulling up the line by hand and cranking, to bring up the monster marlin.

While one of the captains manned the helm, puttering the boat forward in order to raise the fish to a more favorable angle, the other would hold the line. Then, they would suddenly reverse the boat, and pull/crank furiously to bring in the slack.

The captains took turns, gaining back their line inches at a time, with help from Madan. By the time they were able to bring the marlin to the surface, the moon was up.

Preston told the Lahaina News that the best part was “Just to see that big silhouette and go, ‘Man, we actually got this one.’ “

According to the newspaper, Smith’s marlin earned several titles, including biggest marlin since 2008, 3rd largest caught by a woman since 1990, and 14th largest for Lahaina and Maalaea harbors since 1972.

Congratulations crew! (I hope they really like smoked marlin for breakfast.)