Bigfoot has been spotted! The furry missing link wasn’t exactly inconspicuous, however, when he showed up on the red carpet... 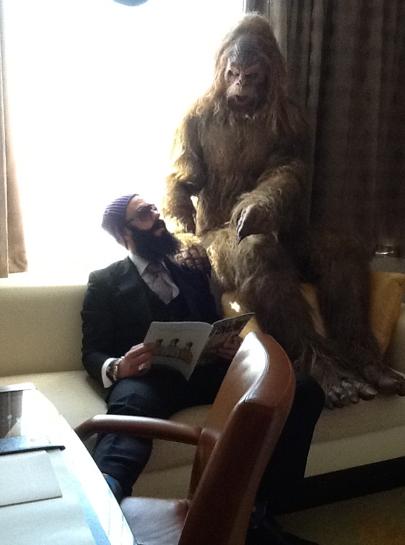 Bigfoot has been spotted!

The furry missing link wasn’t exactly inconspicuous, however, when he showed up on the red carpet as bearded Giants’ pitcher, Brian Wilson’s, plus one.

Wilson and “Squatch” debuted their budding bromance at the ESPY Awards (a sports and entertainment awards show) on Wednesday night.

Despite his reclusive past, the legendary Sasquatch readily mingled with the media, even answering personal questions from Wilson’s followers on twitter.

Among the best of the best Wilson re-tweeted, “He wants to host @Jeopardy once Alex Trebek retires. RT @Jarnone4u What does Squatch want to be when he grows up? #AskSquatch”

“Brosquatch” did not, however, share his feelings about the recent Sasquatch hunting permits that classify the species as exotic game.

According to the Sports & Stars section of the International Business Times, Wilson’s eccentric antics were the entertainment highlight of the evening.

So how did he do it? Was it exceptional tracking skills, blackmail or–the most likely option–distant familial ties? (See the resemblance?)

Find more updates on the pair on Wilson’s twitter.