Rufus, the Famous Wimbledon Hawk is Stolen, Then Returned

Be still my friends, Rufus is back after being MIA for more than three days. Rufus is a four-year-old hawk... 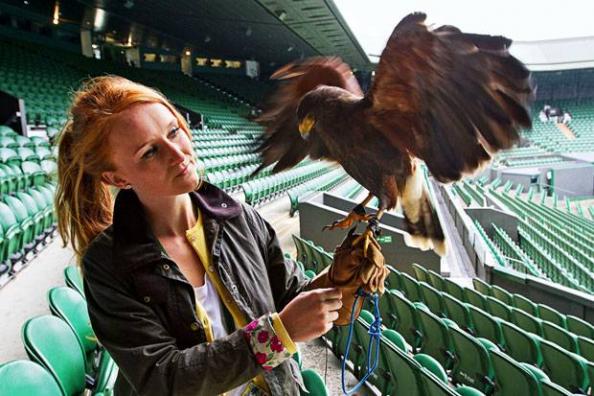 Be still my friends, Rufus is back after being MIA for more than three days.

Rufus is a four-year-old hawk and quite possibly the most famous bird in tennis circles. He is listed as Wimbledon’s official “bird scarer” and even has his own press pass. The bird, whose job it is to scare pigeons away from tennis matches as they can interrupt play, went missing a few days ago when his carry crate was lifted from the back of his owners’ car (Rufus doesn’t have a car – he’s a bird. Come on people, think.)

Rufus’ owner Wayne Davies explained how the bird-napping went down to the London Evening Standard. “The car was on a private drive and away from public view,” Davies said. “I feel somebody may have been watching us each day and waiting for the chance to take him.”

It is believed that the wide spread publicity led to his return. He was found safe and sound on Wimbledon Common this weekend. Authorities told Davies they believe a member of the public who raises pigeons near the famous tennis stadium may have taken Rufus. Davies said of this theory, “It would be a bizarre reason to have taken Rufus, but that is what the police have told me. I’m just glad he is back and is shipshape. He is ready to go back to work. We have missed him.”