I don’t think nerves get any calmer than the ones barely transmitting through Nathan Podmore and Dave Richards. These two... 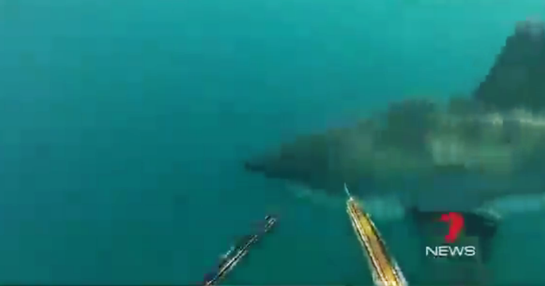 I don’t think nerves get any calmer than the ones barely transmitting through Nathan Podmore and Dave Richards. These two men cautiously and methodically kept a circling great white at bay with just the tip of their spearguns.

Nathan and Dave were spearfishing in 36 feet of water roughly a third of a mile off Geraldton’s Drummond Point, Australia when they realized they were the ones being hunted. Dave told the West Australian, “Nathan was on the top of the water getting ready to go down and I felt something moving behind me. I turned around and all I saw was the back section of the shark … it was a meter away. My heart sank and I just tried to get Nathan’s attention.” The men paired together and slowly began swimming to their boat some 160 feet away.

And began to circle.

Nathan and Dave made the decision not to shoot the shark fearing their spears might simply bounce off its hard skin. Rather they prodded the shark when it came too close. This action kept the shark at a distance long enough for the men to climb aboard the boat.

See video by The Sun here.

Nathan captured the entire event with a camera he was wearing on his head.
These guys are cool customers.

Could you remain as calm as they did in the face of a great white? What would you have done? Comment below!