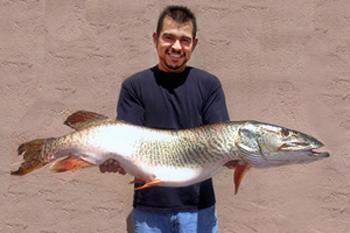 Marcos Mata’s 50.5-inch, 38-pound, 2-ounce tiger muskie is officially the new New Mexico state record. The Albuquerque resident’s entry marks the fourth time in the past year and a half that the record has changed hands.

The previous state record was held by the 31-pound, 14-ounce muskie caught by Justin Easley of Edgewood. These records show that the nonnative muskie is adapting quite well to New Mexico waters.

The species was introduced to Bluewater and Quemado lakes in 2003 by the Department of Game and Fish in an attempt to control two other nonnative species; goldfish and white suckers. Since the initial stocking, more than 300,000 muskie fry and fingerlings have been released into the two lakes.