Like it or not, as the 2012 presidential race marches on toward November, we’re going to learn a lot about... 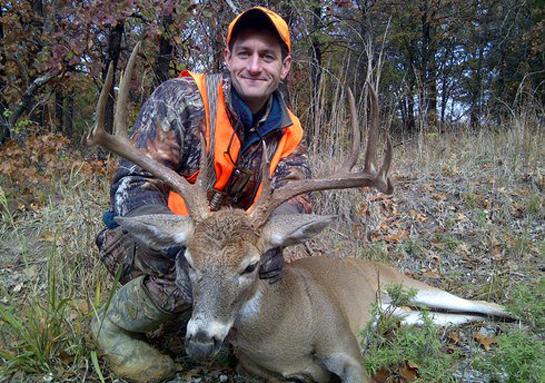 Like it or not, as the 2012 presidential race marches on toward November, we’re going to learn a lot about the candidates’ personal lives. They’ll try to hide their blemishes and highlight their strengths.

While there’s a lot to learn about the newest man to the race, Representative Paul Ryan (R-Wisc.), one thing is for sure: he’s not hiding the fact that he’s a hunter. Ryan, 42, has the buck photo above posted on his Facebook page. He posted it during the middle of the Wisconsin gun deer season with a note saying “I hope you and your family are having a happy Thanksgiving.” The news release announcing Ryan as the new republican vice-presidential candidate states that Ryan is an “an avid outdoorsman” and a member of “his local archery association, the Janesville Bowmen.”

In 2011, Ryan was quoted by the New York Times saying:”What I look forward to reading the most is Quality Whitetails Journal. It’s from the Quality Deer Management Association and gives insight on deer biology and habitat stewardship. I was planting clover this past weekend at my mom’s place in a rural part of Wisconsin. Yes, deer like to eat clover.”

There’s no shortage of politicians trying to paint themselves as outdoorsmen. Romney himself claimed to be a “varmint hunter” in 2007 stating: “I’ve always been a rodent and rabbit hunter. Small varmints, if you will. I began when I was 15 or so and I have hunted those kinds of varmints since then.”

Later, he went on to confuse moose and elk when describing a hunting trip he was on. Romney admits that he’s not a “serious hunter” but enjoys going when he gets the opportunity.

But Ryan seems like a bona fide hunter. Last year, Time magazine shot a photo of him at full draw with a compound bow in his office. One look at the photo, even though he’s in a suit and tie on, and you can tell from his form that he knows what he’s doing (see that photo here).

Ryan’s reputation as a hunter could help the Romney/Ryan campaign in crucial swing states like Iowa, Wisconsin, Ohio, Colorado and Minnesota, which are all home to large populations of outdoorsmen.

If you know anything about Ryan, you probably know that his focus is on balancing the federal budget. To do so, he wants to make sweeping changes to government programs like Medicare and Medicaid, but there are also planned cuts for spending on natural resources and the environment. Spending on natural resources and the environment would be 14.6 percent lower under Ryan’s budget in 2014 than it is today, according to the Washinton Post.

Stay tuned for more coverage on Ryan’s hunting experience and policy objectives in the coming weeks.