“If this was a vegetarian food festival, everyone would have left by now,” said the complete stranger in between bites... 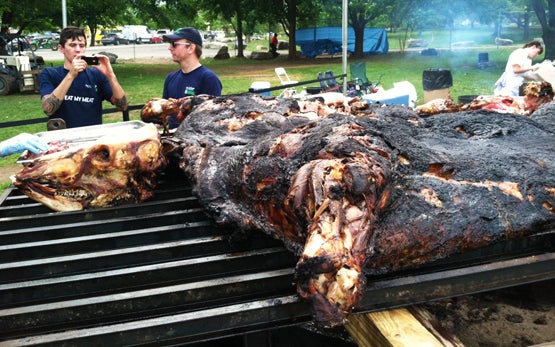 “If this was a vegetarian food festival, everyone would have left by now,” said the complete stranger in between bites of spit-roasted short ribs, as the rain poured down and drenched his hair and t-shirt. I looked at him from under my hood, took another bite of grilled rib steak covered in bone marrow butter, nodded, grunted, and grinned.

Officially, we were under a tornado watch, but not a single one of the hundreds of gathered meat lovers considered heading for the exit. Not that there was anywhere to go. We were on an island–specifically Randall’s Island–in the East River between the New York City boroughs of Manhattan and Queens, at an event dubbed Meatopia.

A Disney World of Meat
Imagine a field, maybe 5 acres in size, ringed by dozens of grills, spits, and other means of cooking animal flesh and organs. Scattered among the grills are kegs of beer and whiskey barrels filled with brown-liquor concoctions. Now imagine roving packs of hungry carnivores mingling about in a soaking rain and strafing wind, sampling one delectable meat creation after another and washing them down with as much booze as they care to swig. That was the scene last Saturday at Meatopia, one of the most carnal, primal events I’ve ever had the pleasure of experiencing. This was the ninth iteration of the so-called “Woodstock of Edible Animals,” which brings together dozens of the world’s best chefs, butchers, and purveyors of meat.

The field was broken up into themed neighborhoods. Up on Carcass Hill, Pat LaFrieda roasted an entire 1,000-pound Creekstone steer (as you can see in the photo at the top), while April Bloomfield served Kansas City-style pulled pork sandwiches from a whole barbecued hog. Over in Beaktown, Mike Toscano offered grilled quail alla diavolo as Zak Palaccio spit-roasted ducks. Meanwhile, in Offalwood, Andy Little served up scrapple sliders, while Jonathon Sawyer prepared scrambled lamb brains and eggs. The US Navy SEAL cook team grilled up venison tenderloin, cream cheese, and jalapeño wrapped in bacon, as Harold Moore dished out rillettes of dark meat squab at the Meatopia County Game Reserve. In the Deckle District, the line stretched 50 deep for a taste of Aaron Franklin’s famous Texas beef brisket, and John Stage wowed the crowd with his St. Louis spare ribs and barbecued jumbo chicken wings.

While the chefs were understandably tight-lipped with their secret recipes, I was able to jot down the mixings for a cocktail you might consider whipping up at camp this fall to go with your own favorite meat recipes (pictured below is Jimmy DiResta, co-host of Discovery Channel’s “Dirty Money,” building an actual bar from scratch during the event).

Fat and Happy
If all this sounds somewhat overwhelming–albeit incredibly delicious–that’s where the “dilemma” comes into play. After all, a man can only eat so much meat. (Damn the sensation of fullness! I just want to continue tasting good things!) But I’m proud to say I made it through 21 of the 38 different dishes before my body said, “No mas.” Plus, I have twelve months to condition myself for a better performance at the tenth-annual Meatopia next year. It can’t get here soon enough.