When Bob Condon of Soldotna, Alaska shot this moose last month, he didn’t expect to break any records. But the... 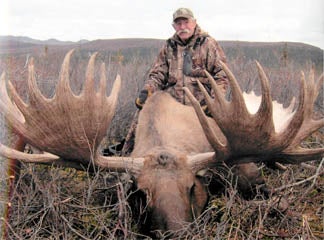 When Bob Condon of Soldotna, Alaska shot this moose last month, he didn’t expect to break any records. But the massive bull weighed more than 1,500 pounds and sported a rack stretching more than 73 inches, according to the Redoubt Reporter.

A scorer put the rack at 731, and although that figure has since shrunk to 706, the moose is still the second largest ever harvested in the Safari Club International books. Official measurements will be taken after the antlers undergo their full drying period.

“I’ve never hunted strictly for trophies,” Condon told the Redoubt Reporter. “I’ve just believed in hunting and letting the rest fall into place, so I was elated when I got up to this guy. I mean, I’m 73 and I can see my twilight days coming, so to know you still have something like this in you, it’s a real thrill.”

On the third morning of a planned 11-day hunt in Alaska’s Brooks Range, Condon spotted the moose about two miles away. Although he stalked closer and tried grunting the bull in, the moose wouldn’t get any closer than 400 yards.

So, Condon took the shot and dropped the moose with his .375.

Condon’s hunting buddies and a group of Wisconsin hunters spent the next several days helping him field dress the meat and pack it out. Now, with a fully packed freezer, Condon just has to wait for the record results.