A Lesson in Lazy: Angler Catches Redfish From His Living Room

If sedentary sportsmanship keeps growing in popularity, we might have to change our name to Indoor Life. Jason Schall, 38,... 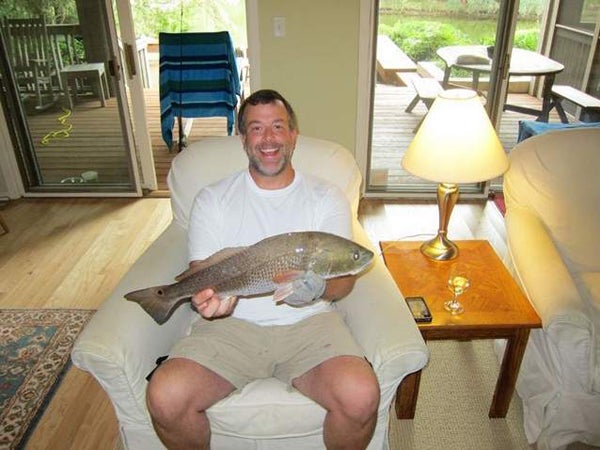 If sedentary sportsmanship keeps growing in popularity, we might have to change our name to Indoor Life.

Jason Schall, 38, concluded a record-setting week of fishing with a catch from his living room. During Saturday’s Clemson vs. Boston College football game, Schall ran a baited line from his living room to the lake behind his South Carolina home, reports the Post and Courier. Within moments, he felt a bite.

“He wasn’t on the couch three minutes and all of a sudden I saw the line go tight,” Schall’s friend, Jason Bennett, told the Post and Courier. “He yanked on it and set the hook. That was an amazing thing.”

The hooked fish turned out to be a redfish, and Schall released his catch after a quick indoor photo. This marked Schall’s fourth notable redfish of the week: he caught the first and second place redfish in the Hooked On LIfe tournament in Charleston. His third redfish, from Kiawah Island, measured 45.5 inches and fell short of the world record by a just 1.5 inches.

The next day, however, the International Game Fish Association informed Schall that the largemouth bass and two striped bass he caught on a recent Las Vegas trip are now official Nevada state records.

As for his last catch, it’s unclear whether Schall ventured outside to claim his prize, or simply reeled the redfish across the yard and right up to his La-Z-Boy.