Garrett Mikrut, 26, was hunting whitetail from his treestand north of Duluth on Saturday, the same day Minnesota’s hotly-debated wolf... 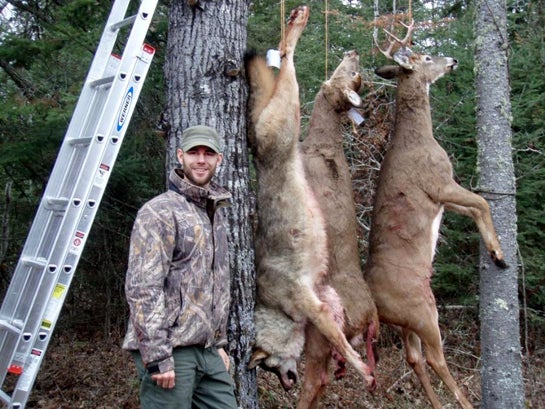 Garrett Mikrut, 26, was hunting whitetail from his treestand north of Duluth on Saturday, the same day Minnesota’s hotly-debated wolf season began. He noticed a doe and a fawn racing toward him and thought a buck might be in pursuit, reports the Star Tribune. But instead of a buck, two wolves appeared.

Mikrut quickly fired two rounds at one of the wolves. The second shot dropped the 80-pound male almost instantly, according to the Duluth News Tribune.

Of the 3,600 licensed wolf hunters in Minnesota, only 69 hunters have taken a wolf so far. That’s a success rate of less than two percent. Wildlife officials expect the harvest to taper off as the early season continues, and most don’t foresee meeting the 200-wolf harvest quota by the season’s end on November 18. This is because the early wolf hunt coincides with deer firearms season, and harvest trends are similar for both species.

Typically 60 percent of whitetail harvests occur during the first three days of the season.

Mikrut didn’t think he’d have an opportunity to shoot a wolf since he’s only spotted one other wolf from his stand in 14 years. Mikrut’s father, Paul, saw seven wolves in two days while hunting the Superior National Forest this weekend, but couldn’t get a clean shot. Both won their wolf licenses in a lottery held by the Minnesota Department of Natural Resources, along with two other hunting buddies.

The father-son team also killed a pair of deer, with a doe for Mikrut and an eight-pointer for Paul.

Minnesota removed gray wolves from the state’s endangered species list in January, making this the state’s first legal wolf hunt since the 1970s. A second wolf season that allows trapping will open November 24. The late season also allocates a target harvest of 200 wolves.