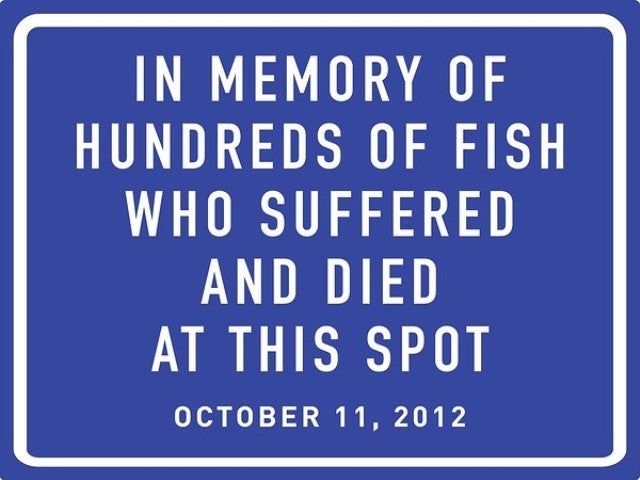 A date that should never be forgotten.

A day when thousands of what are believed to have been salt water bass died when the semi-truck they were cargo in spilled them onto the streets of Irvine, Washington. To honor those lost soles…err, bass…PETA believes a sign should be erected at the very spot to commemorate the fateful accident that sent 1,600 pounds of fish to the big ocean in the sky, according to The Blaze. People for the Ethical Treatment of Animals volunteer Dina Kourda wrote to the Irvine Public Works Department requesting that a sign be placed at the corner of Walnut and Yale avenues to honor the lives of the fish. The letter read in part, “Although such signs are traditionally reserved for human fatalities, I hope you’ll make an exception because of the enormous suffering involved in this case, in order to remind drivers that all animals — whether they’re humans, basset hounds or bass — value their lives and feel pain.”

Basset hounds Dina? Were you trying to be ironic? I mean you do realize that basset hounds were bred to be hunting dogs, yes?
Dina’s letter continued by explaining another purpose the sign would serve. She said the sign, “would also remind tractor-trailer drivers of their responsibility to the thousands of animals who are hauled to their deaths every day.”

PETA spokeswoman Ashley Byrne agrees with Dina’s request because, “Hundreds of fish perished in this accident, suffocating slowly on the roadway.”

So what does the city of Irvine think of the request?

City spokesman Craig Reem says, “I do think it’s fair to say we have no plans to erect a memorial.”