Florida is overrun with pesky invasive species, and Burmese pythons might be the worst of the lot. To address the... 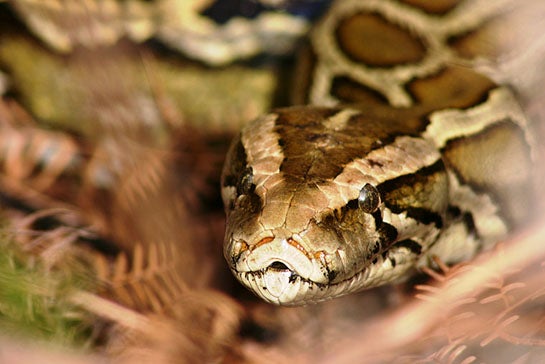 Florida is overrun with pesky invasive species, and Burmese pythons might be the worst of the lot. To address the state’s rampant constrictor problem, the Florida Fish and Wildlife Conservation Commission announced a python hunting contest with cash prizes starting next month.

The 2013 Python Challenge kicks off January 12 and lasts until mid-February. The inaugural competition will accept pythons harvested from four wildlife management areas in south Florida, including the Everglades. Past efforts to control the exotic population included snake-sniffing dogs, GPS-tagged “Judas” snakes, and licensed reptile hunters, according to the Bellingham Herald.

The contest offers two participant categories, one of which is designated for serious python hunters with existing permits. The other category is open to the general public after a $25 entry fee and a brief online snake-identification course. Each bracket offers a $1,500 prize for the most Burmese pythons captured and a $1,000 prize for the longest python.

Apart from eliminating some of the scaly pests, the contest aims to raise public awareness about invasive constrictors. FWC officials also hope to learn more about the size and range of the current population. All participants must submit data sheets with each kill, and permit holders are required to submit additional GPS tracklogs from their hunt.