West Virginia University Mountaineer mascot Jonathan Kimble found himself between a bear and a hard place last week after he... 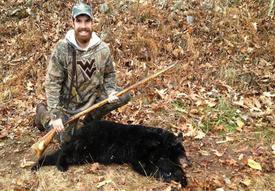 West Virginia University Mountaineer mascot Jonathan Kimble found himself between a bear and a hard place last week after he Tweeted details of his hunting trip with the university-issued muzzleloader.

Jonathan, who was voted to be the Mountaineer last February, took to the woods of his native Pendleton County Monday with a group of 15 friends and family members for the opening day of bear hunting season. He was armed with the school’s famous muzzleloader.

About four hours into the hunt, the party’s dogs treed a female black bear. Jonathan took the bear with one shot from the same rifle he uses as a mascot at athletic events. That evening, Jonathan tweeted a picture of himself with the rifle and the bear along with the message, “Killed a WV Black Bear today with my Mountaineer rifle today!!”

That tweet was furiously reposted. A video showing Jonathan shooting the bear followed by his screaming, “Let’s Go Mountaineers!” was posted by someone in the hunting party soon after (it is certainly not the classiest hunting video ever made). When Jonathan heard of the video, he asked the poster to take it down.

He or she did, but not before it was copied and shared on YouTube. Mixed reactions to Jonathan’s using the Mountaineer mascot’s rifle for hunting soon followed. Some of the reactions were positive such as that from alum Ryan Zelaski who re-Tweeted the pic along with the commentary, “Coolest. Mascot. Ever.”

Others weren’t so excited about what they saw. Tami W posted the question, “Why do men think killing animals is cool? Did it attack you or yours? You gonna eat it?”

Alex Triveri tweeted the rather morbid response, “The next time the mountaineer decides to shoot a defenseless bear cub out of a tree I hope momma bear is around.”

Jonathan responded to the latter two Tweets stating that bears are over populated in the area, that he and his friends eat bear meat, and that the bear was not a cub.

Unfortunately, Jonathan’s responses didn’t keep the University from speaking to him about the incident.

University spokesman John Bolt sent an e-mail detailing the discussion to the press.

“While Jonathan Kimble’s actions broke no laws or regulations, the University has discussed this with him and he agrees that it would be appropriate to forego using the musket in this way in the future,” Bolt stated. “There are some provisions regarding the gun, but none that prohibit its use outside of the University-sponsored functions or for hunting purposes.”

Despite the uproar over Jonathan’s hunt, he says that he’s not the first to use the rifle for one of its intended purposes. “A previous Mountaineer told me he’d taken it deer hunting back in the 90s and others have said they’ve been hunting with it,” Kimble told the Charleston Daily Mail. “It’s something like a tradition.”

A tradition that was ended this week.

Should Jonathan and future Mountaineers be allowed to hunt with the mascot’s muzzleloader?