My grandma’s cat, Mitzi, was fairly pleasant as cats go–or at least she seemed that way during the daytime. What... 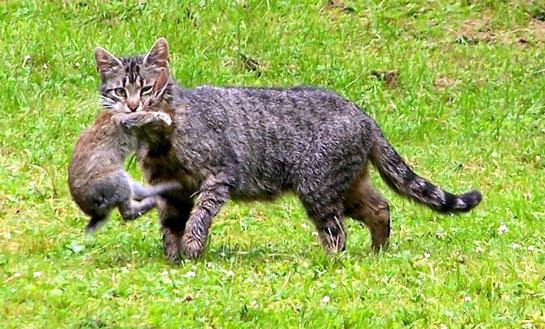 My grandma’s cat, Mitzi, was fairly pleasant as cats go–or at least she seemed that way during the daytime. What she did at night was another matter entirely. She was a stone-cold killer and a damn good one judging by the daily deposits of critter parts–her trophies–she’d leave on the doorstep each day. Hell, I never realized that our cottontail rabbit population was that high.

A new study just published in the journal Nature Communications, quantifies what we outdoorsmen who have been paying attention have known for years. Cats, especially feral ones, are a huge threat to wildlife. Biologist, in fact, estimate that each year, felines kill as many as 3.7 million birds and 20.7 billion smaller critters such as mice and chipmunks. Now, I’m pretty much okay with the mice and chipmunks, but am decidedly not comfortable with the rabbit slaughter–at all. Further, a University of Georgia study, which included attaching video cameras to 60 cats, found that one-third of a typical cat’s day is spent killing stuff.

Murderous cats are apparently a huge problem in New Zealand as well, where environmentalist Gareth Morgan has called for mandatory country-wide cat registration. Now there’s an idea! Hell, if I need to register my gun, you should need to register your damn cat.