Outdoor News of the Weird: Moose Attacks Skier, Pike Chokes to Death, and a $1.7 Million Bluefin

As any hunter or fisherman can tell you, the outdoor world is not without its share of weird, bizarre and... 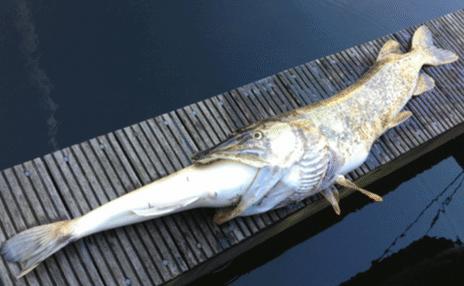 As any hunter or fisherman can tell you, the outdoor world is not without its share of weird, bizarre and just plain nutty happenstances. Here’s a look at some of the crazier outdoor news of the week:

Pike Choked To Death
While fishing along a jetty near Amsterdam, anglers in the Netherlands discovered (and photographed) a 3-foot pike that had obviously bitten off more than it could chew. Stuck in its gullet was a similarly sized Zander (European walleye). As one observer said: “Gluttony just killed that fish.”
**
Bearhug From A Bobcat**
Roger Mundell of Brookfield, Mass. is home recovering from his wounds after being viciously attacked by a bobcat that was hiding out in his garage. Mundell sustained numerous wounds before he finally retrieved his handgun from his home and put the cat down. Later tests revealed that the bobcat had rabies. Mundell, his nephew, who was also attacked, and his wife who was splattered with the bobcat’s blood have all started rabies treatment.

The $1.7 Million Bluefin
As Bluefin tuna stocks continue to dwindle across the globe, comes word out of Tokyo of a Giant Bluefin that has fetched $1.7 million at Tokyo’s Tsukiji fish market. At $3,500 a pound, it’s almost triple the record price set last year.

PETA Calls For Snake Head Ban…No Animals on Mars
Sportsmen in Florida are not likely to pay any attention whatsoever to PETA as they head into the Everglades for the great Burmese python hunt. PETA officials sent absolutely no shockwaves through the state when they called on hunters to avoid decapitating the giant snakes.

“We’re quite concerned that any concern for the snakes’ pain and suffering is likely to go without notice or consequence,” said PETA spokesperson Lori Kettler.

In other PETA news…the animal rights group is urging future colonizers of Mars to adopt a purely vegan diet.

When Animals Attack–Skiers
Finally, it was a tough week on the slopes as skiers, in separate incidents, were attacked while just trying to have fun. The moose and the porcupine were still said to be at large.