An Australian boxer has become the target of Internet outrage and an investigation after he posted a picture of himself... 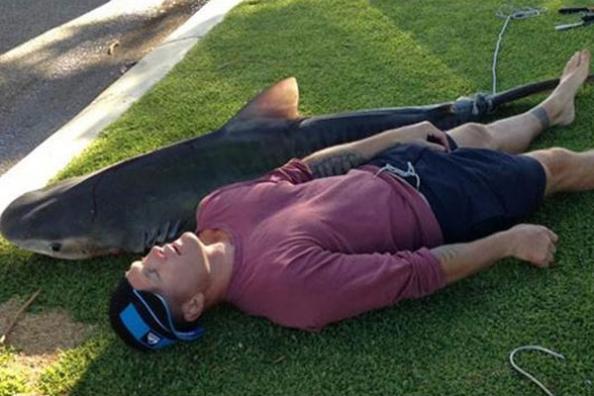 An Australian boxer has become the target of Internet outrage and an investigation after he posted a picture of himself with a shark that he caught off Perth.

Last week Danny “The Green Machine” Green posted two pictures of himself and a tiger shark and his intention to eat his catch on Facebook. In one of the pictures, Green is lying alongside the shark and the two appear to be the same length, about 6 foot 1.

This prompted many to immediately exclaim that the fish was oversized for Western Australia waters and therefore should not have been landed. Responding to the outcry, Western Australia Fisheries’ regional manager metro Tony Cappelluti said, “The Department of Fisheries is aware of the tiger shark photographs and is making an assessment prior to any further investigation of the matter.”

Green, of course, broke no law if he caught the shark in an area where length limits differ. Near Perth, a legal shark is no longer than 700 millimetres (about 27.5 inches) from the front of the dorsal fin to the back of the rear dorsal fin.