As a fourth generation Texan, I know two things as fact (yes, only two): 1) Everybody loves Mexican food 2)... 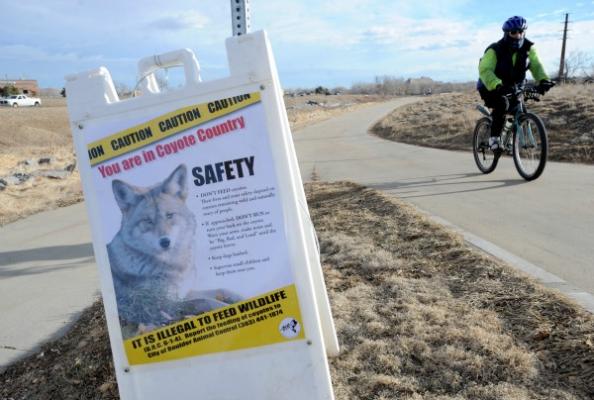 As a fourth generation Texan, I know two things as fact (yes, only two):

2) Coyotes will eat anything

Someone in Boulder, Colorado must know the same things as he or she placed a mound of 10 burritos on the Boulder Creek Path which is a known gathering spot for coyotes.

While most agree that the main food item in the pile was burritos city spokeswoman Jody Jacobson conceded that the pile might have consisted of manicotti or crepes (Food snob alert!). Fruit, salad, and bread were also part of the intended song dog trough. Feeding wild animals in public places is always a bad idea of course as the animals soon become accustomed to humans. For this reason the Daily Camera reports that city officials have placed five signs along the path between 30th and 55th streets that read, “You are in coyote country. It is illegal to feed wildlife.”

Boulder’s urban wildlife conservation coordinator Val Matheson explained the dangers of feeding coyotes tortilla and bean based food items. “In supplying coyotes with a food source or feeding coyotes, you’re supplying them with a reason to be more comfortable with humans,” Matheson said, “They continue to be more and more comfortable around people, and that seems to lead to their expectation of people as being a supplier of food. And so they will then approach people looking for food, and we have seen in other areas that that’s when people get bit.”

Not only that but they’ll get used to the heat factor of the food and only want to add hotter and hotter sauce to increase the burn.

And who’ll pay for that? The city?

Jennifer Churchill, spokeswoman for Colorado Parks and Wildlife, agreed with Matheson. “That would be absolutely inappropriate,” Churchill said of feeding coyotes anything. “It’s setting those coyotes up for failure. People need to understand that you are not helping wildlife. When you’re feeding them, you’re taking away their healthy and natural fear of people. You’re just leaving everybody in jeopardy who uses that area, including the coyotes.”

Yeah, the coyotes are in jeopardy alright…of wanting some beer to go with that Mexican food!