North America’s abundance of snow geese – and the damage they’re causing to their fragile Arctic breeding grounds in northern... 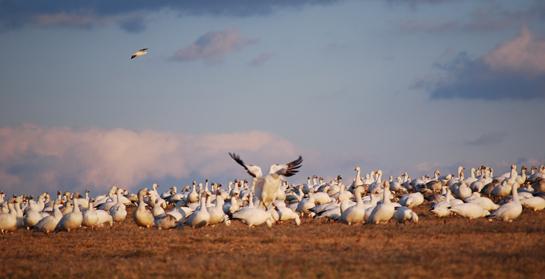 North America’s abundance of snow geese – and the damage they’re causing to their fragile Arctic breeding grounds in northern Canada – has prompted state and federal fish and wildlife agencies to expand this year’s hunting season in an attempt cut the species’ numbers in half.

The Atlantic Flyway Council, which consists of the US’s and Canada’s federal fish and wildlife agencies, and the Canadian provinces and U.S. states (Delaware, Maryland, New Jersey, New York, North Carolina, Pennsylvania, Virginia, and Vermont) estimates that current populations holds at least 1 million breeding pairs compared to 50,000 breeding pairs roughly half a century ago. U.S. Fish and Wildlife Service biologist Chris Dwyer explained to the Associated Press of one reasons for the massive increase in numbers: “In the Atlantic states, snow geese are field feeding during the day and they roost at coastal wildlife refuges at night,” Dwyer said. “You do tend to see thousands and thousands of geese flying back and forth from different fields.”

These birds then return to their breeding grounds in numbers that far exceed what the land can support.

Environment Canada, a federal agency, released the following statement about the situation, “Although the Arctic is vast, the areas that support migrating and breeding geese and other companion species are limited in extent and some areas are likely to become inhospitable for decades.”

Hopefully, the extended season will help slow this problem.