It’s the scariest fish that could have made the record books. Last month Florida state biologist Kelly Gestring netted a... 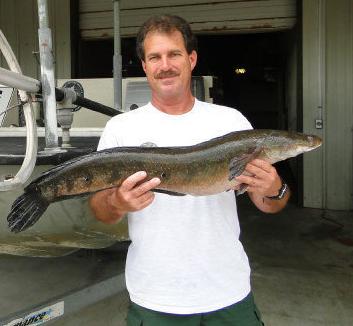 It’s the scariest fish that could have made the record books.

Last month Florida state biologist Kelly Gestring netted a huge 14-pound, 3-ounce bullseye snakehead during an electric-shocking expedition in the C-14 canal in Northwest Broward. Had the fish been landed with rod and reel, it would have beaten the International Game Fish Association’s all-tackle record snakehead by 1.5 pounds. This almost-chance-at-glory in the record books doesn’t exactly excite Kelly though. In fact, he sees it as a sign that his state (like much of the rest of the country) is losing the battle against invasive species.

Snakeheads, like some 21 other species of fish found in Florida’s canals, are not native to the state. As such, they impact the environment in a negative way. They compete with native species for food and habitat and have no natural enemies. The fact that a snakehead like Kelly’s can obtain such a weight is proof that the species is making itself at home.