They caught a… a… What did they catch? Fishermen off the coast of County Waterford (Ireland) were surprised to trawl... 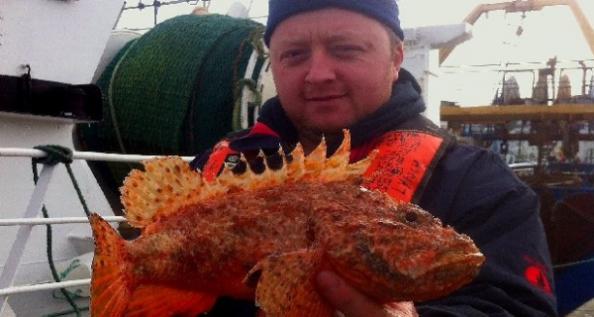 They caught a… a… What did they catch?

Fishermen off the coast of County Waterford (Ireland) were surprised to trawl up a scorpionfish last week. Surprised because the fish is native to the warm waters of the Mediterranean and not the ice-chilled deep waters of the UK.

Skipper of the Eblana Peter Lynch and his bother Brendan spotted the bright coral-colored fish among their net of ray and cod. They removed the oddity, ever mindful of its venomous spines, from the net and placed it in a separate holding tank. A call to the Sea Fisheries Protection Authority confirmed that the fish was in fact a scorpionfish and not native to the waters where it was caught.

As of this writing, the fish is en route to the Dingle Oceanworld Aquarium where it will be put on display. SFPA inspector Declan MacGabhann explained to the Irish Times that only four previous scorpionfish have been found in UK waters. “The seas around Ireland are getting warmer,” He said. “And we are seeing an increased number of what we would classify as rare fish turning up in fishermen’s nets.”