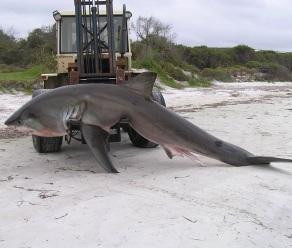 Commercial fishermen in Western Australia accidentally netted this 13-foot great white shark just 100 meters off a popular beach earlier this week. The big shark died in the net because it was unable to move water over its gills.

Cheyne fisher Dumpy Wheatcroft (yeah, apparently his first name is Dumpy) told thewest.com that tourists flocked to watch the shark being loaded on to a forklift.

“They were absolutely bloody rapt to get that close to a monster like that,” Wheatcroft said.

Cheynes Beach Caravan Park owner Allan Marsh told the site that the risk of shark attacks at the beach was very low. “It’s the first white pointer I’ve seen there and I’ve been here 12 years,” he said.

The share will be dissected and used for research, according to fisheries department directory general Stuart Smith.