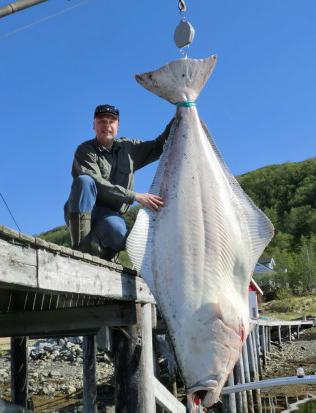 A German angler more than fulfilled his wife’s request that he bring home some halibut this week when he pulled a 427-pound halibut from the Barents Sea, off the coast of Norway.

Christian Johannsen, 45, of North Friesland, Germany, was fishing with friends when he hooked into something big. Four hours later and with the help of two buddies, he landed what turned out to be an eight-foot long, 427-pound goliath of a halibut.

“Every fisher dreams about this, it’s like winning the lottery,” Johannsen told The Local.

Johannsen’s fish is a monster but it’s still pretty far from the world record: a 540-pound halibut was caught off the Norwegian coast.

Johannsen said that the battle was so rough that he was unable to lift his arms for the two days following his catch. But that didn’t keep him from taking some of his fish back home.