On Wednesday morning, around 7:30 a.m., Sharon Flannery spotted a black bear and its two cubs exploring her backyard in... 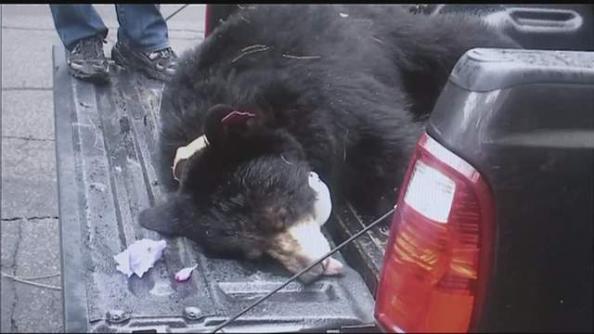 On Wednesday morning, around 7:30 a.m., Sharon Flannery spotted a black bear and its two cubs exploring her backyard in West Hartford Connecticut. Just before the bears appeared, she had let out her dog, Maggie.

Moments later Flannery looked outside and watched as the 200-pound bear began chasing Maggie towards the house.

Flannery ran to her backdoor and tried to scare the bear off. When the bear got dangerously close to Maggie, Flannery started kicking it to protect her dog.

“It was definitely the scariest thing that happened to me,” Flannery told NBC Connecticut. “Before I even had time to process it, there was a bear. It was right in front of me.”

In the end, Flannery was able to get Maggie, and herself, safely inside. The bear and its cubs ran and climbed a tree in a nearby yard, according to NBC Connecticut.

Local police and officers from the State Department of Energy and Environmental Protection responded and tranquilized the bear and the bear cubs.

However, the bear was euthanized and tested for rabies as a precaution, according to state officials.

The cubs were deemed old enough to survive on their own, and will be released in another area, officials said.

Flannery suffered a puncture wound and several scratches to her lower leg. She was treated for her injuries and is expected to make a full recovery.

Maybe this story will serve as another hint that Connecticut needs a bear hunting season?