Timothy Beck took this outrageous buck last fall in Indiana. The deer was officially accepted by the Boone & Crockett... 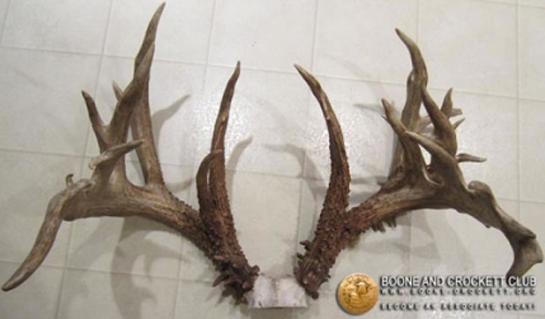 Timothy Beck took this outrageous buck last fall in Indiana. The deer was officially accepted by the Boone & Crockett Club earlier this year with a net score of 305 7/8 inches. It’s the fourth largest nontypical in history and one of only five bucks to break the 300-inch mark. “This is one of those deer that come along so rarely, it makes you pause and marvel at the wonders of nature and modern conservation,” Richard Hale, chairman of the B&C’s records committee, said in a press release.

To celebrate this incredible whitetail, B&C rounded up the only 5 whitetail bucks that boast more than 300 inches of antler.

This buck was taken by Jerry D. Bryant in Fulton Co., Illinois in 2001. Bryant shot this buck at 15 yards with a crossbow. Interestingly, he kept the news of his 36-pointer quiet at first. Bryant was going through a divorce and didn’t want to split his trophy in half. After the divorce was closed, Bryant took his incredible buck to be scored.

The biggest buck taken in recent history was killed by Timothy J. Beck in Huntington Co., Indiana on November 17 last year. It’s the second highest scoring whitetail ever taken by a hunter.

This buck was taken by 15-year-old Tony W. Lovstuen in Monroe Co., Iowa in 2003. Tony’s dad shot at the buck and grazed it in a previous season. But months later, trail camera photos proved that the buck was still alive and well. Tony eventually shot the 38-pointer at 70 yards from a ground blind during a special youth hunt.

This deer wasn’t killed by a hunter. It was picked up in Portage Co., Ohio in 1940. The deer was allegedly killed by a train and the rack was later acquired by an avid antler collector and outdoor writer named Dick Idol.

The grandaddy of all whitetails was picked up in St. Louis Co., Missouri in 1981. It’s unknown how this deer was killed (it was found by a hunter and reported to the state DNR). The buck had no bullet holes in it and no visible wounds. It was aged at five years old. To this day, the monster rack is owned by the state of Missouri.

See the Biggest 40 Whitetails of All Time here.