We would like to officially nominate Jason Leon to the Redneck Hall of Fame. Leon spotted a massive Burmese python... 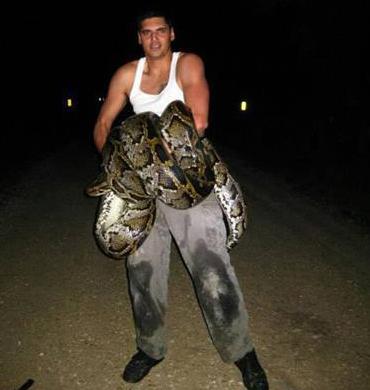 We would like to officially nominate Jason Leon to the Redneck Hall of Fame. Leon spotted a massive Burmese python hiding in a bush near the side of a road near the Florida Everglades on May 11. So what did he do? He wrestled the beast, knowing it was an invasive species, and eventually decapitated it with a knife.

Cell phone footage of the wrestling match made Leon a Youtube star last week. Also, the Florida Fish and Wildlife Conservation Commission confirmed that the 128-pound snake was a state record.

This according to the FWC: _”… record-setting Burmese python found in Florida. Jason Leon was riding late at night in a rural area of southeast Miami-Dade County when he and his passenger spotted what turned out to be an 18-foot, 8-inch Burmese python.”

“The Burmese python is an invasive species that has negative impacts on the Everglades ecosystem and its native wildlife. The FWC actively coordinates with local, state and federal partners, including university researchers, native tribes and nongovernmental organizations, on the research, management and capture of pythons. The general public should not try handling or capturing this snake because of its strength and size.”_

Way to go Jason! What do you think Newshounders, would you have tried to kill this snake or would have stayed in the truck? Comment below!