Banff motorcyclist Tim Barlett played a mile-long game of cat-and-mouse with a wolf on Highway 93 in Kootenay National Park... 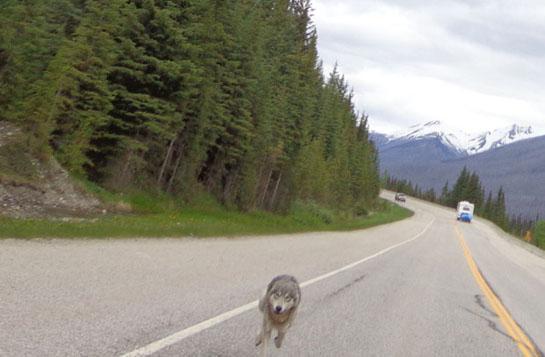 Banff motorcyclist Tim Barlett played a mile-long game of cat-and-mouse with a wolf on Highway 93 in Kootenay National Park earlier this month. His story would have likely turned into nothing more than local lore if not for the handful of cell-phone photos he was able to snap during the encounter.

“[I] was doing about 90km/h in the right hand lane going north and [the wolf] came from the left hand side of the road. It darted out, crossed the other lane and I had to swerve and accelerate to get around it. I went forward about 100 meters and when I turned around it was just standing in the middle of the lane watching me,” Bartlett said.

“I stopped the bike, pulled my gloves off, took my camera out, did a u-turn and came back, and that’s when I managed to get the pictures. When [the wolf] heard me coming, it jumped back over a [roadside] barrier and it started running. I sped up a little bit, it got in nice and close and I was driving with my right hand and clicking pictures with my left. When I first came back around, it came in really close; probably a bit too close. It would have been a real bad time to run out of gas…” he said.

The chase continued until traffic started stack up on the highway and Bartlett pulled away. The wolf ran into the woods and Bartlett rode off with some wild pictures and the story of a lifetime.