A 28-pound, 9-ounce rainbow trout caught in Idaho–a fish that would crush the existing state record–will not qualify for the... 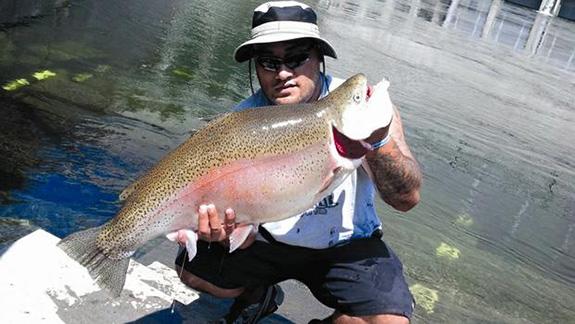 A 28-pound, 9-ounce rainbow trout caught in Idaho–a fish that would crush the existing state record–will not qualify for the record books, the Spokesman-Review reported late last month.

The fish cannot be submitted due to differences between state and tribal fishing rules. Angler Tui Moliga is a member of the Nez Perce Tribe, and when he caught the monster rainbow, he was using hook and line style that is legal for tribal members but ineligible for state records. He caught the trout below the Dworshak Dam.

“It can be a tribal record fish but it can’t be a state record,” Ed Schriever, chief of the fisheries bureau for the Idaho Department of Fish and Game, told the Spokesman-Review. “Under state fishing rules that fish would not have been available for harvest even though it is completely legal under tribal rules.”

In addition to that, the fish is undergoing DNA testing to confirm if it is a true rainbow and not a Kamloops, a strain from Canada that is considered different than other rainbows.

Despite the complications, Moliga’s mood is unwavered.