The summer of 2013 is already being marked by tragic shark attack stories and spotings, specifically in the shallows. Yesterday... 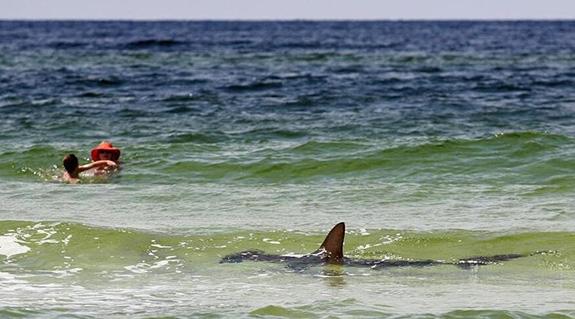 The summer of 2013 is already being marked by tragic shark attack stories and spotings, specifically in the shallows.

Yesterday afternoon a French teenager, who was identified only as Sarah by the media, was killed in a shark attack while swimming off the Indian Ocean island of Renuion.

Sarah is the fifth person to be killed by sharks on the island since 2011, and her death is one of the 10 fatal attacks worldwide in the past 10 months.

But the shocking detail about this story is that she was not surfing or swimming far out in the ocean. She was in the shallows, only 15 feet away from shore.

The teenager’s body was sliced into two at the torso, and then “a part of her body was taken away by the shark,” Gina Hoarau, the head of public safety on the island, told The Daily Telegraph.

It’s a horrific story, and should serve as a lesson to beach-goers and costal anglers: Keep an eye out for sharks, even if you’re near shore.

Yesterday NPR’s Russell Lewis snapped a picture (seen above) of a hammerhead cruising the shallows of Seagrove Beach, Florida.

As Lewis reports, the shark explored the shallows and didn’t hurt anyone, but it did swim between the beach and a few nervous swimmers.