Fish catches man. An ode to Captain Ahab. A 230-pound Ahi tuna capsized a boat and nearly drowned the angler... 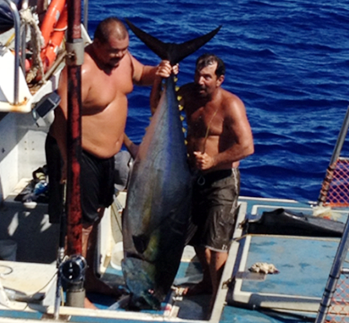 Fish catches man. An ode to Captain Ahab. A 230-pound Ahi tuna capsized a boat and nearly drowned the angler who had him on the line.

“He gaffed it once in the back and once in the eye and that caused the fish to take a final dive and he drove straight down. The line wrapped around my dad’s ankle and pulled him overboard,” Anuhea Wichman, Anthony’s daughter, told KOHN.

Although we know how Wichman got dragged into the ocean, media reports are still unclear as to how and why his boat started sinking.

When Wichman was able to break free, he pulled himself onto the hull of his boat using his safety line. With his waterproof cell phone, he called his daughter for help.

“All I could hear was him hyper-ventilating and puking. And through his breathing, he was able to say three words: sinking, Coast Guard, and buoy,” Anuhea told KOHN.

The Coast Guard located Wichman through the GPS position of his cell phone.

Anuhea had also called some of their friends to help with the search.

As a rescue diver dropped in from a Coast Guard helicopter and pulled Wichman to safety, his two friends, Abraham Apilado and Jordan Ornellas, sprung into action to save Wichmans boat and gear.

To their surprise, the fish was still on the line.

“We were both pulling the fish and put that buggah away first, and continued salvaging whatever we could. We got all his reels and rod back to him,” Apilado told KOHN.

They were also able to tow Wichman’s boat back to Port Allen.

According to KOHN, Wichman suffered a few bruises and rope burn.

But whatever happened to the tuna? Wichman and his daughter asked the two fishermen who came to his rescue to keep the Ahi as a token of their appreciation.