If this isn’t your first time using the Internet, you’ve probably seen the photo of a great white shark leaping... 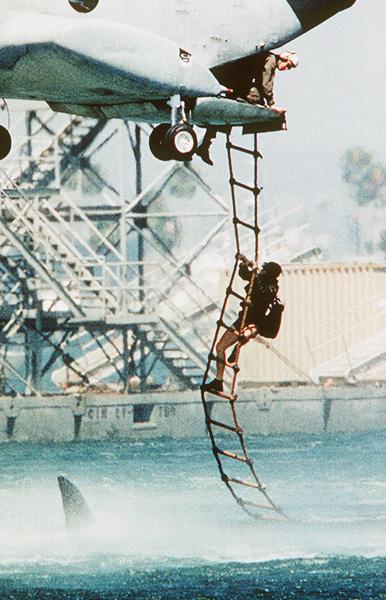 If this isn’t your first time using the Internet, you’ve probably seen the photo of a great white shark leaping after a diver who’s halfway up a helicopter ladder.

That picture (see below) is a fake. Sorry guys.

However, Jamie Condliffe on the Gizmodo blog has found a helicopter/shark photo (pictured left) that’s apparently real: “Originally captured way back in 1996, this images was recently picked from the U.S. National Archives in honor of Shark Week. The original caption read: ‘A soldier grips the rope ladder extended from the rear of a helicopter as a shark fin passes in the water close below.’ “

The story that ran with the fake shark picture below was that it was shot during a British Navy training exercise off the coast of South Africa. The myth goes on to say that the picture was selected by National Geographic as the “Photo of the Year.”

Unlike that farce, the photo above is the real deal. Or is it? Do you think the U.S. archives shot is real? Comment below!