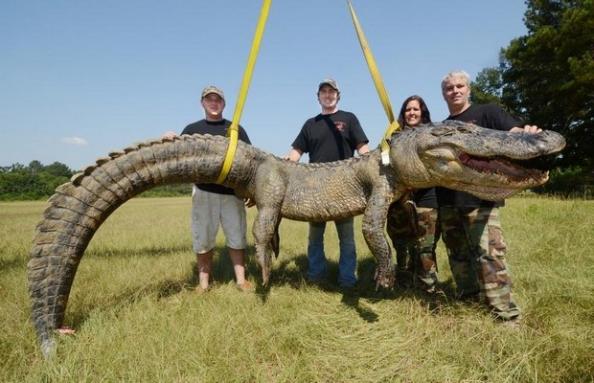 Last week Beth Trammell of Madison lay claim to Mississippi’s heaviest alligator when she landed a 723.5-pound behemoth, a record that proved to be shortlived when an hour later Dustin Bockman of Vicksburg took down a 727-pound swamp dragon.

All of this was put to rest yesterday when Dalco Turner of Gluckstadt tangled with a 13-foot, 7-inch alligator from a backwater area of the Mississippi River near Port Gibson. When Dalco learned that his unofficial measurement of the beast beat the current record by one-half inch he asked Mississippi Department of Wildlife, Fisheries and Parks’ Alligator Program coordinator Ricky Flynt to officially measure the gator. Ricky arrived and after hoisting the animal with an excavator declared the catch the heaviest alligator ever taken in the state with an official weight of 741.5 pounds. The record holders were listed as Team Gatorslayers: Dalco Turner, John Ratcliff, Jennifer Ratcliff, and Jimmy Greer.

Ok, one record down.

But when Flynt measured the Gatorslayer gator he came up with a measurement of 13 feet, 6.5 inches, tying the record for the state’s longest animal.

Dalco said his team’s catch almost didn’t happen. “It was around midnight when we initially saw this one,” he told the Calrion Ledger. “We passed it by the first time. We really didn’t think he was big enough to go after.”

Team Gatorslayer instead went on to catch a gator that measured less than 7 feet. When they saw lights from other hunters ahead of them the team returned to give the first gator a second look. This time the team realized the animal for the monster it was. They put three hooks into the animal only to have the beast snap them while towing the boat deeper into the river. “He broke three lines, and I had the only hook that stayed in him the whole time,” said Dalco.

The team frantically worked to get more lines on the gator and eventually got him to within striking distance of the boat. The alligator fought back with such tenacity that he actually broke teeth biting into the boat’s hull.

The real work began after the animal was dispatched.

“We couldn’t even pull him onto the bank,” Dalco said of the struggle that ensued trying to haul the alligator from the water. “We tried to pull him (ashore) with the boat, we tried everything.”

It eventually took the help of two other men to get the gator to shore.

“Even with these two guys, it was very hard, and we were wore out,” said John Ratcliff. “If it wouldn’t have been for those two guys, we would have never gotten him in the boat.”

There’s still time left in the season for another record breaker to come forth. Do you think this record can be broken?