The Case Of The Severed Grizzly Bear Head

_”__Minnesota Wild defenseman_ Clayton Stoner _is under fire after a picture of him hoisting the severed head of a grizzly... 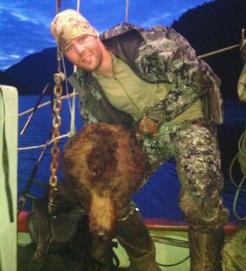 _”__Minnesota Wild defenseman_ Clayton Stoner _is under fire after a picture of him hoisting the severed head of a grizzly bear appeared online.” NBCnews.com_

In what may be the most hysterically ludicrous “news” story of the week comes word that Minnesota Wild defenseman Clayton Stoner is taking some heat from animal activists after pictures of him with a trophy grizzly bear he killed appeared online.

Stoner killed – legally and with all permits – the bear last May. Pictures of him, according to some press outlets, “holding its severed head and paws” appeared shortly thereafter. The 6’4″, 213-pound enforcer issued a statement this week in response to the uproar over his trophy saying that hunting is a tradition for him and that he has absolutely no plans to stop.

Good for you Clayton.

Clayton isn’t the only NHL player to boast of his hunting exploits and catch fire for it. Vancouver Canucks left wing David Booth also was the target of anti-hunting groups after he also posted a picture of himself with a trophy bear.

We need more athletes to boast of their love of hunting, don’t you think? In fact, we’d like to go hunting or fishing with them.