English tourist Peter Jones and his wife were only 30 minutes in to their cruise on the East Alligator River... 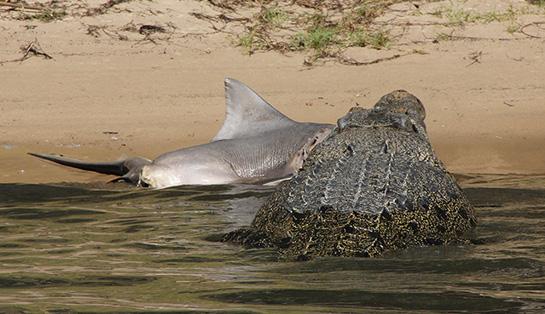 English tourist Peter Jones and his wife were only 30 minutes in to their cruise on the East Alligator River in Australia when they came upon a massive saltwater crocodile munching on a bull shark.

“Its hard for me to say how large they both were as I lack the experience in estimating the size of both crocs and sharks, both being very rare in rural Cambridgeshire,” Jones told the NTNews.

“Big, springs to mind, even bloody huge or perhaps enormous. Our guide referred to both the croc and shark as being ‘very big.’ “

The tour group tried to get closer to the croc but it hauled the shark from the bank and disappeared into the river. The tourists found it back on the riverbank with its meal when they left.

It seems that the shark was alive when the tourists first spotted it. It’s unclear how the croc caught the shark or if it was previously wounded.