Famous Photo of Teddy Roosevelt Riding a Moose is Fake

Teddy Roosevelt did some cool stuff. He led the Rough Riders in the battle of San Juan Hill, he hunted... 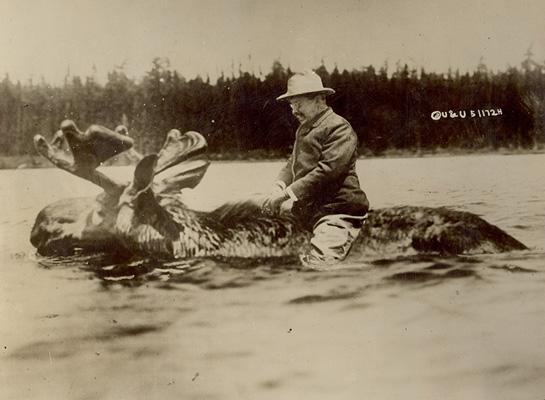 Teddy Roosevelt did some cool stuff. He led the Rough Riders in the battle of San Juan Hill, he hunted dangerous game in Africa, and he got his face etched into a mountain. However, despite what the photo above suggests, Teddy never rode a swiming moose.

Heather Cole, Curator of the Theodore Roosevelt Collection, shed some light on this infamous web photo in a post on the Houghton Library blog.

This from the blog: _”In 1912, TR was campaigning as a promising third party presidential candidate for the newly created Progressive (or Bull Moose) Party. Political cartoons frequently used a moose to illustrate the party’s struggles and flaws, but perhaps none so creatively as a collage by the photography firm Underwood and Underwood, titled ‘The Race for the White House.’

Underwood’s humorous triptych, published in the New York Tribune on September 8, 1912, features three of the four presidential candidates (only Eugene Debs is missing): incumbent William Howard Taft astride an elephant, TR in the center riding a moose, and Woodrow Wilson riding a donkey.

Underwood appears to have cut out an existing photograph of TR riding a horse, and carefully pasted it onto an image of a swimming moose. Under closer examination, one can see that the focus and shadows on TR do not match the moose.”_

Some solid photo trickery from Underwood, but Teddy was an avid big-game hunter so it shouldn’t come as too much of a surprise that this shot is fake. I’m guessing he would have had more respect for a bull moose.