It was a case of his eyes being too big for his stomach. When the Glasgow Fish Market in Scotland... 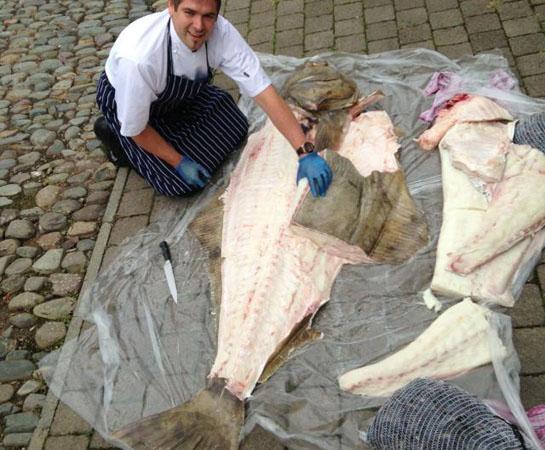 It was a case of his eyes being too big for his stomach.

When the Glasgow Fish Market in Scotland offered restaurateur Rab McAleese a freshly caught monster halibut he jumped at the opportunity. It wasn’t until the fish was delivered to his Little Italy eatery that he realized it was too large to get into his kitchen.

“Our kitchen is upstairs and there was no way we could fit it inside,” he explained to the Mail Online. “I hadn’t really given it much thought before it arrived. Myself and my chef Ashley had to take it off the bone outside.”

McAleese paid over $2,300 for the 220-pound, 7 feet long fish, which was eventually filleted in the restaurant’s yard, a move that ended up being pretty good advertising.

“It took about an hour and people passing by couldn’t believe it, we stopped the traffic on the street outside and nearly caused an accident,” McAleese said. “There was a lot of talk about it in the town because so many people had saw it when it arrived. It sold it in less than a week.”

Despite the problems associated with the fish, McAleese said he’d jump at the opportunity to purchase another.

“Catches like that are fairly rare but I would definitely buy another one,” he said.

The super-sized fish was line caught off the north coast of Scotland.