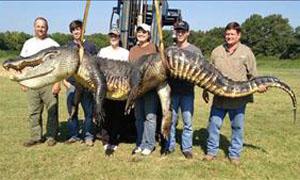 “We chased him for about two hours,” Dustin told NBC News. “Then we got a shot on him.”

That shot came via a shotgun after Dustin and crew originally pegged the gator with a crossbow. It took an additional four hours to get the gator in the boat.

Just prior to Dustin’s monster haul, a 723.5-pound, 13-foot, 5.5-inch gator was taken by Beth Trammell of Madison, Miss. and hunting party. That behemoth was taken near Redwood. Just as with Dustin’s alligator, it took a long time to load.

“It took about four hours to get it in the boat,” Trammell said. “We had to flag another boat down to help us out it was so big.”

She said the gator was so large that the gaffs used to move the it bent like “candy canes.”

Despite these monstrous catches, the Mississippi length record has yet to be broken. It still stands at 13 feet, 6.5 inches. That beast was captured on the Pascagoula River in 2008.

Both parties say they plan on eating their catch. Trammell and company say they’ll be out after gator again this weekend.

Do you think she can top her own record? Comment below!!