“Feces, broken glass, feathers all over the place, it was a disaster.” Frat party? Crack house? Nope. What Officer Mark... 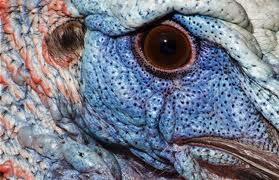 “Feces, broken glass, feathers all over the place, it was a disaster.”

What Officer Mark Ehrenburg was describing was what a New Jersey residential home looked like after it was trashed by an intruding wild turkey Thursday.

The home destruction began when Kinnelon resident, teacher, and grandmother Marie Manco walked into her living room and encountered a huge gobbler holding court. Marie ran into her bedroom and called 911. CBS News New York reports that she told the dispatcher, “A wild turkey came through my skylight and it’s flying around my house right now destroying everything. I’m in my bedroom, but I’m afraid to come out.”

Police arrived to find the aforementioned mess and that the turkey had fled the scene via another window.

Maria said the turkey stood almost as tall as she was and that its path of destruction through her home left $6,000 in damages, a fact her insurance company isn’t exactly crazy about. Maria said the company is very reluctant to pay.

So why did the bird talk turkey through Maria’s home?

Authorities believe the Tom saw his reflection in the skylight glass and attacked.

“It’s mating season for turkeys and we’re attributing the aggression to that,” Lt. John Schwartz said. (Apparently, Lt. Schwartz can use a refresher course on turkey biology.)

As for Maria? She says she’s still on edge because of the attack.