Huge Bull Elk Taken in Arizona, Could Rank Second in Pope and Young

When bowhunter Casey Brooks, 48, took this massive bull on the San Carlos Reservation in Arizona last month, he had... 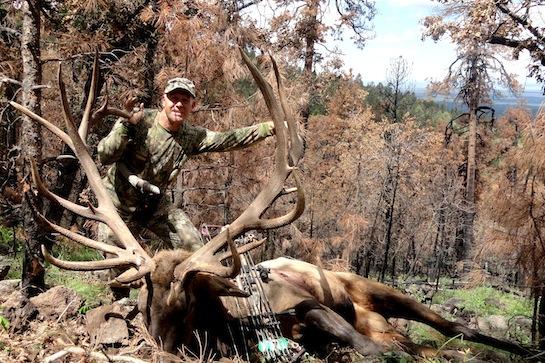 When bowhunter Casey Brooks, 48, took this massive bull on the San Carlos Reservation in Arizona last month, he had already harvested 60 bull elk throughout his hunting career. But that doesn’t mean his latest hunt wasn’t memorable. This nontypical bull’s impressive score could break the current second place Pope and Young Club record, set last season by Brooks himself.

After a week of wicked storms Brooks, a Hoyt prostaffer, set out early on September 12 with his guide, Delray Smith. He soon called in a big bull that might’ve scored 400 inches, but Brooks decided not to shoot. “I walked away from it, which felt like a terrible mistake at the time,” Brooks said.

He decided to try his luck at a nearby bedding area instead. Brooks drew in five bulls with his cow call, one right after another. A sixth elk remained out of sight, bugling from a pocket of trees 125 yards down the road. Although Brooks called repeatedly, the bull eventually gave up and bedded down.

Changing tactics, Brooks tried bugling. The trees rustled and the bull emerged screaming at 80 yards. He pushed straight up the hill above the two men and stepped into Brooks’ shooting lane at 30 yards.

The broadhead hit home just behind the heart. As the bull surged forward, a call from Brooks stopped him instantly. The elk took one look around and collapsed down the slope.

The elk crashed down the hill straight toward the two men. Brooks could hear his antlers smashing against the rocks and was certain there’d be nothing left to measure. “He ended up landing on the skid road where we’d been standing,” Brooks said. “We got out of the way just in time.”

The bull rose and trotted 30 yards down the road, over a hill, and straight into some low-hanging branches. Brooks saw the tree shake and heard the bull hit the ground. He waited five minutes, then followed. After untangling the enormous rack from the branches, Brooks finally got a good look at his bull.

“I was completely amazed,” Brooks said. “It’s hard to explain how excited I was.”

Now Brooks has a freezer full of meat and a bigger trophy bull than he’d anticipated. The 10 by 10 bull was green gross scored at 448 6/8. Brooks predicts this bull will bump his 2012 second-place P&Y elk down to third. Last year’s bull was officially scored at 436 1/8. The P&Y world record non-typical American elk was taken in 2003 in Coconino County, Ariz. That bull scored 442.