Bethel Park, Pennsylvania resident Andy Kovac told KDKA that his backyard is generally overrun with deer – he once counted... 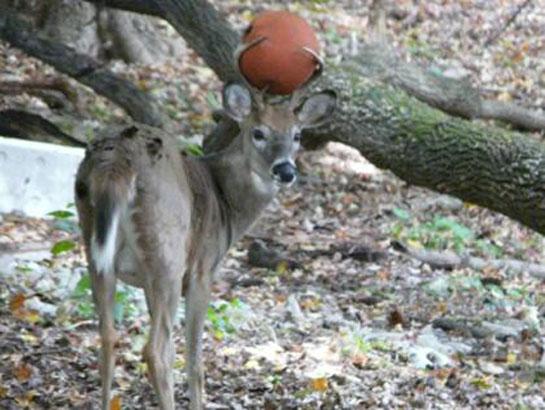 Bethel Park, Pennsylvania resident Andy Kovac told KDKA that his backyard is generally overrun with deer – he once counted 25 whitetails behind his house – but never had he seen one with a basketball stuck between its antlers.

“That was a classic, my wife called me down, I grabbed my camera, and luckily you can see he wasn’t in a big hurry,” Kovac said.

No one knows how the ball came to be lodged in the small buck’s rack, but Kovac has an idea.

“They can be very playful, we’ve seen them running around trees, and doing all kinds of playful acts. He was probably was just playing and pushing that ball around,” he said.

Kovac said he didn’t feel the need to report the whitetail to the game commission because the ball seemed to be deflating and the animal was still able to feed.

Luckily, he did call KDKA so we can all see just how odd this event was.

NOTE: KDKA reported that the deer in the picture had a ball stuck in its “horns.” Those are antlers, KDKA. Let’s get those terms right.

What’s the strangest thing you’ve ever seen on a deer’s rack? Comment below!