A fish so rare and so serpentine that ancient sailors knew it as a sea serpent (then again those same... 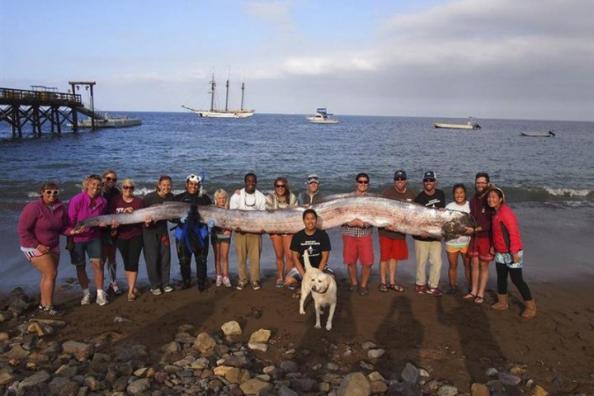 A fish so rare and so serpentine that ancient sailors knew it as a sea serpent (then again those same guys often mistook manatees for mermaids, so go figure) washed onto Southern California’s Catalina Island on Sunday.

This 18-foot oarfish was found almost entirely intact in Toyon Bay by instructors at the Catalina Marine Institute (CIMI). Oarfish are deep-water dwellers found at depths of 3,000 feet and below. They and are seldom seen.

Here is video of a live specimen swimming near the surface.

Also known as a ribbonfish, the oarfish is the longest known bony fish in the world, with some specimens reaching 50 feet in length.

The CIMI instructors aren’t sure what they’ll do with this individual but have contacted several museums already to see if they are interested in housing it.

That’d be one heck of a taxidermy job!