Two Newfoundlanders happened upon an oddity last week in the form of a Greenland shark choking on a large chunk... 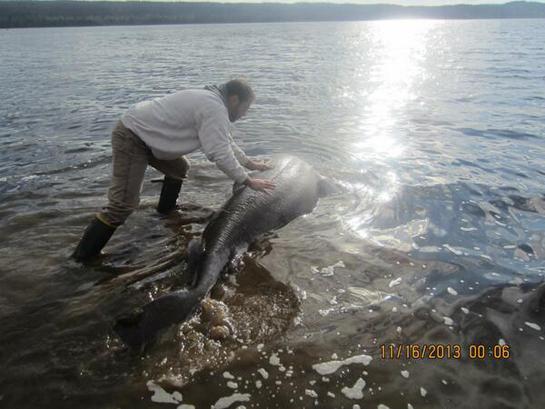 Two Newfoundlanders happened upon an oddity last week in the form of a Greenland shark choking on a large chunk of moose.

Derrick Chaulk told the Canadian Broadcasting Corporation he spotted the shark while driving past a harbor in Newfoundland. He approached the estimated 8-foot long fish to see that it had bit off more than it could chew. When another passer by, Jeremy Ball, stopped to see the strange site the two men yanked the moose meat free from the shark’s throat.

“He swallowed [the moose] and got it halfway down and couldn’t cough it back up and couldn’t get it all down, and then I think the tide brought him in,” Chaulk speculated to CBC. “A couple yanks [on the moose] and it just came right out.”

The men also theorized that the shark got the too big of a bite of moose from a hunter that cleaned his kill in the sea.

Greenland sharks aren’t strangers to eating terrestrial mammals. Some have even been discovered with polar bear remains in their gut.