Study: Sharks Approach Humans from Behind, Can Tell Which Way We’re Facing

A new study published in the journal Animal Cognition in December suggests that not only can some shark species tell... 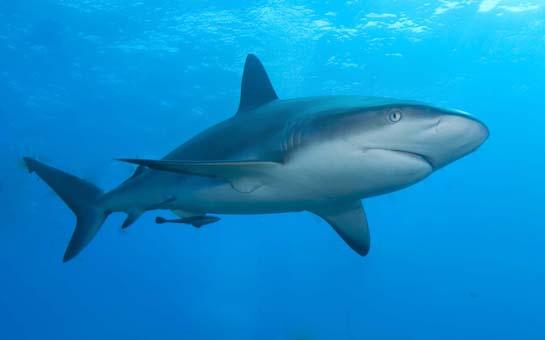 A new study published in the journal Animal Cognition in December suggests that not only can some shark species tell which way a human is facing, but that they tend to avoid that human’s field of vision. When those sharks do approach humans they tend to do so from the rear.

This tendency has been noticed by divers and shark scientists for some time, but has only recently been studied.

The study to prove the behavior involved divers kneeling on a seafloor staring ahead for hours in Florida waters. Video footage was shot from above to document shark interaction with the divers. The Caribbean reef sharks that came close to the human subjects did so from the rear 80 percent of the time.

Erich Ritter, a scientist at the Shark Research Institute in Florida, told LiveScience, “They [sharks] truly do swim up from behind, be it that they want to sneak up or they don’t want to be seen. It doesn’t mean they sneak up in a way of having a vicious thought; mainly, they are curious but at the same time cautious.”

How the sharks can tell which way a person is facing though, still remains a mystery.

Ritter said that sharks may know from previous experience with humans that the diver’s facemask is where his eyes are located. Then again, maybe not. It’s speculation at this time.

George Burgess, director of the Florida Program for Shark Research at the Florida Museum of Natural History doesn’t believe that sharks approaching from the rear is necessarily true.

“I am not persuaded that the author’s thesis was proven in this study,” Burgess said. “We don’t know the past history of these sharks, and whether this interaction with humans represents a new experience.”

Ralph Collier, a researcher with the Shark Research Committee in Los Angeles, does believe sharks know front from back. He says that the study helps explain how some divers have turned around to find a shark swimming toward them.

But again, maybe those sharks had interaction with humans before.

Who knows? I don’t, and I do not care to put my body out there in order to find out.