While fishing in the South Pacific Ocean, a New Zealand man made an unusual catch: this completely transparent "wobbly shrimp-like creature." 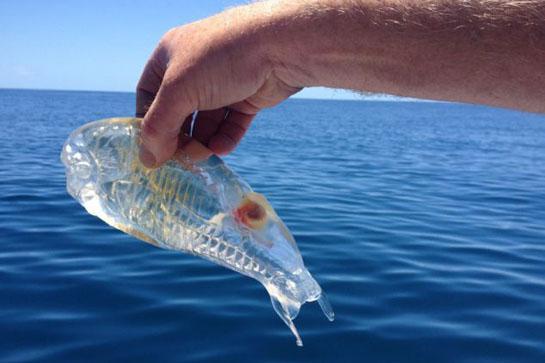 While fishing in the South Pacific Ocean, a New Zealand man made an unusual catch: this completely transparent “wobbly shrimp-like creature.” Stewart Fraser and his two sons were fishing at a spot 43 miles north of the Karikari Peninsula on New Zealand’s northern tip, according to MailOnline. When Fraser spotted this see-through creature swimming near the ocean’s surface, he just had to investigate.

“I was in two minds whether to haul it in, but curiosity got the better of me and I decided to take a closer look,” Fraser told MailOnline. “It felt scaly and was quite firm, almost jelly-like, and you couldn’t see anything inside aside from this orange little blob inside it.”

Although Fraser and his sons have never seen anything like it before, a researcher from the National Marine Aquarium in the United Kingdom suspects this clear critter is a Salpa maggiore. According to Paul Cox, the director of conservation and communication at the aquarium, a salp moves by pumping water through its gelatinous body. It also strains the water to feed on the phytoplankton that live in the ocean’s upper layer. The salp life cycle alternates with each generation, switching between a solitary lifestyle and living in groups that form long chains.

Salps like these are typically found in colder seas such as the Antarctic Ocean, which boasts the world’s largest salp population. Apart from their native waters, scientists don’t know much about the mysterious salps. Keeping and raising this shrimp at home is hard, you would need one of the best shrimp tanks out there but also a strict care guide. Let’s not mention that it’s super rare to catch it.

Interestingly the salp’s most distinctive feature-its transparent body-actually keeps it safe. Just like some jellyfish and hydroids, salps are defenseless animals that inhabit open water. Fortunately its translucent anatomy makes it less noticeable to predators.

“Being see-through is a pretty good camouflage in water,” Cox told the website.