A kayak fisherman from Australia caught an estimated 200-pound Marlin off the coast of New South Wales earlier this month.... 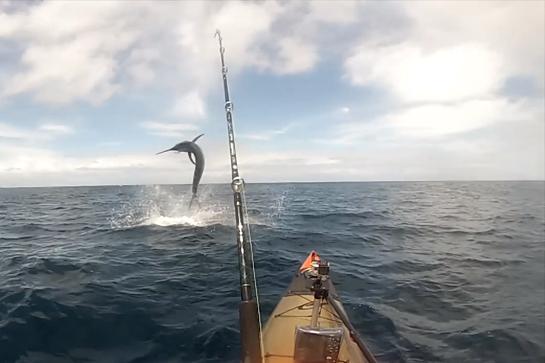 A kayak fisherman from Australia caught an estimated 200-pound Marlin off the coast of New South Wales earlier this month. Tommie Strydom and fishing buddy Paul Pallet filmed the entire 90-minute fight and uploaded a condensed version of the footage to YouTube.

The pair were fishing near Coffs Harbour when Strydom felt a bite. Strydom had fished the area for five years and the line flying off his reel made him suspect a shark had snagged the live bait, reports the Daily Telegraph.

But Strydom quickly realized he was mistaken when a marlin leapt out of the water. The marlin jumped into the air repeatedly, thrashing against the line. “I thought I was going to lose him, to be honest,” Strydom told the Telegraph. “Then it went down deep and it took about an hour to reel in.”

When the marlin finally gave in, Strydom hauled the fish up for a quick photo before reviving and releasing it. Although the fish weighed an estimated 200 pounds, Strydom told the Telegraph he releases anything he’s not interested in eating. “If it was a mackerel, believe me it would have been inside my kayak and on the dinner plate that night,” Strydom said.