A man-eating tiger in India is believed to have killed its tenth victim Sunday evening. The female cat’s latest victim... 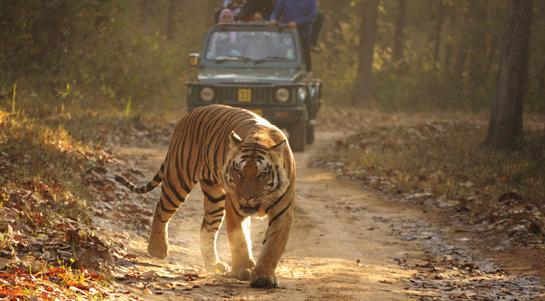 A man-eating tiger in India is believed to have killed its tenth victim Sunday evening. The female cat’s latest victim was a 50-year-old man who was collecting firewood at the edge of Kalgarh village at the time of the attack. The apex predator was eating the man’s abdomen and leg when villagers were able to scare it away with shovels and metal rods.

The tiger is believed to have strayed from Jim Corbett National Park, that country’s oldest national park named after famed tiger hunter and conservationist Jim Corbett. Although many believe that all 10 victims have fallen to the same cat, at least one expert says otherwise. Wildlife biologist with Wildlife Institute of India Bivash Pandav told the Times of India: “There is thick forest in intervening area between Sunday’s kill and the one that took place on Thursday. This forest is populated by tigers. It’s unlikely, although not impossible, that the tigress would have traversed through territories of other tigers to get to the Kalagarh spot.”

Corbett field director Samir Sinha told the paper that it is his and his staff’s job to find the truth, “We are not rushing to any conclusion. Our priority would be to establish the identity of the tiger. We are placing camera traps in the area to get pictures. Besides, forest staff would try to gather more information by patrolling on foot and on elephants.”

It is believed that the tiger that killed the unidentified villager on Sunday inspected but did not enter a live trap set with a cow near the place of the attack the night before.

This most recent round of human attacks (tiger attacks aren’t that uncommon in India) began on December 29, when a 65-year-old man was mauled in Sambhal district. According to chief wildlife warden of Uttar Pradesh, Rupek De: “The animal has started attacking humans because it is not getting its natural prey. The tigress must be tired because it is not getting adequate rest.”

Not a very comforting thought for the villagers in the tiger’s path to be sure.