The Minnesota Department of Natural Resources agreed to move forward with an emergency feeding plan for wild deer in the... 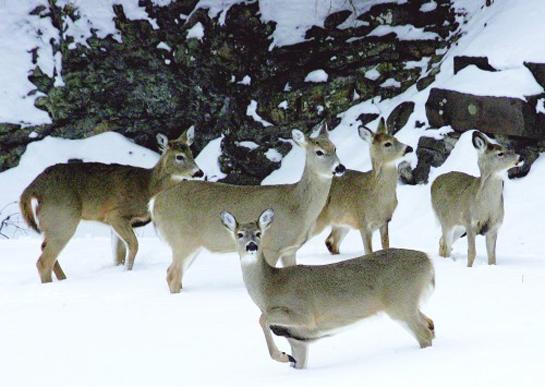 The Minnesota Department of Natural Resources agreed to move forward with an emergency feeding plan for wild deer in the northern part of the state Wednesday morning. Whitetails in the region have been hit hard by brutal temperatures and heavy snows this winter, reports the Star Tribune.

Although reluctant to allow the emergency feeding, the DNR felt pressure from state hunters and the Minnesota Deer Hunters Association to take action. The two agencies met multiple times in past weeks to resolve their conflicting opinions about supplemental feeding. Last week DNR wildlife chief Paul Telander said the agency objected to the practice of feeding deer. He cited its high cost and questionable effectiveness.

“I don’t disagree with any of the reasons DNR doesn’t like emergency deer feeding,” MDHA executive director Mark Johnson told the Duluth News Tribune. “But, in the same breath, that money was collected and set aside for this purpose, and a lot of my members in northern Minnesota think it’s time to use it.”

Officials estimate the undertaking will cost $170,000. The funds will be withdrawn from a special account specifically designated for emergency feeding. Minnesota’s last emergency feeding session was instated after two consecutive severe winters in 1996 and 1997. In the aftermath of that crisis officials enacted a surcharge of $.50 on whitetail licenses to fund future winter emergencies. The account currently holds about $770,000.

In 2004 officials expanded the account’s purpose to finance deer disease efforts. During the past decade the DNR has spent about $10 million to help eliminate chronic wasting disease and bovine tuberculosis. Wildlife officials are concerned the emergency feeding efforts could undo some of that work. Supplemental feeding often causes deer to gather in larger numbers than normal, which facilitates the spread of disease.

Despite these concerns the DNR plans to distribute a special pellet that deer can digest easily. Providing feed like corn can cause deer and other ungulates to bloat and die, which happened recently to a bull elk in Pennsylvania. MDHA sports 16,000 members, some of whom are volunteering to distribute feed across deer wintering areas via snowmobile.

During the last emergency feeding in 1997 the DNR handed out bags of feed to anyone who volunteered. Few deer had access to the supplemental feed that year. Despite this, northern deer numbers recovered to their previous levels within two years. Five years later the herd population peaked at an all-time high.

“Deer are extremely resilient at rebuilding their numbers, which is one reason why feeding isn’t needed,” Telander told the News Tribune. “But we have to act in good faith with hunters who paid into this fund. We’re going to get this done as best as we can.”

Under a prior agreement the DNR committed to begin emergency feeding when the winter severity index reached 100 by mid-February. Many areas in the Arrowhead area have recently surpassed 120 on the scale, and more winter weather is on its way.

Officials expect it will take at least two to three weeks to finalize plans, so feeding won’t begin until at least March. Feeding will continue through March and into early April until the snow melts and deer can find forage again. When spring finally rolls around, the DNR and MDHA plan to discuss whether feeding deer is either practical or effective so they’re prepared for similar situations in the future.