South Texas Family Claims to Have Shot a Chupacabra

El Chupacabra strikes again. Maybe. This time on a Victoria County ranch in South Texas. Doug Ohrt, 79, and his... 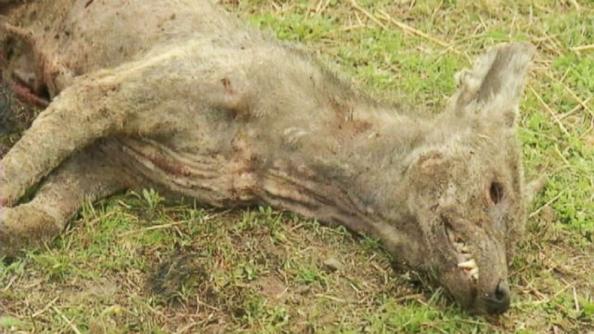 Doug Ohrt, 79, and his family was enjoying life on their ranch Sunday evening when they heard a strange howl.
“My grandson ran outside and shot him from about 240 yards. It’s mangy looking and it’s got long hair on the back and hair on its legs,” he told ABC’s Good Morning America.

Despite not knowing what the animal was, his wife Lucy said the rest of her family knew for sure.

Chupacabra or not, Ohrt said the beast had been trying to eat his dog’s food for quite some time.

Once known only as mythical “goat suckers,” the name Chupacabra has now become synonymous with partially hairless or mangy coyotes. Several of these animals have been either spotted or shot in South Texas in the past few years.

“They’re a mythical creature that most people see, but what it really is sarcapotic mange which is caused by a mite that bites the animal and it can be on any mammal – dogs, cats, coyotes foxes, and humans can get another version of it as well,” Josh Turner, a wildlife biologist with Texas Parks and Wildlife, told KAVU.

Humans can avoid getting sarcastic mange by wearing gloves when skinning chupacabras…er…coyotes with mange.

Hairless coyote or chupacabra? I don’t care. I want one!