Look closely. Although it appears as though both of these animals are dead, one of these bucks is still kicking.... 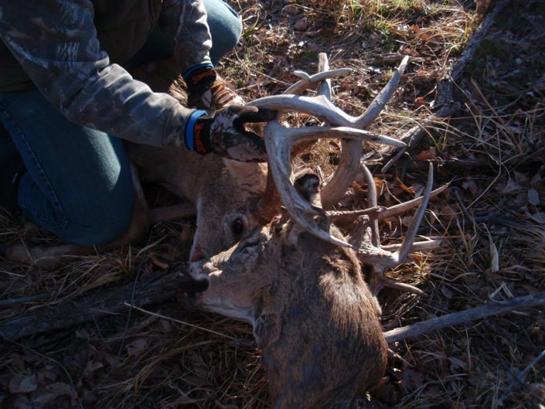 Look closely. Although it appears as though both of these animals are dead, one of these bucks is still kicking.

The two animals were discovered by Luke Laha, a wildlife management instructor at Pratt Community College in Kansas.

Laha told the Outdoor Hub’s Daniel Xu that he first saw the deer while scouting some property in south-central Kansas two months ago. “I saw it was a decently-sized buck with what I thought at the time was a smaller buck,” Laha said. “But then I saw that all that was left of the second one was the head, spine, and rib cage.”

Since then, coyotes in the area literally made a movable feast of the fallen deer, eating on it as the stronger buck dragged its lifeless body around.

Despite knowing this would probably occur, Laha said he hoped the deer would survive and even told his students to be on the lookout for the mismatched death pair.

“We trapped all week but didn’t see anything,” Laha said. “On the very last day, Friday, we got to the last trap on the left side of the property and one of my students says ‘hey, there’s your buck.'”

The buck was obviously in bad shape. “It’s been stressed for the last few months, pulling around its own body weight and looking-eye-to-eye with coyotes,” Laha explained.

Mr. Laha and his class trailed the animal until one of the students was able to push the deer to the ground and, with the help of classmates and a hacksaw, separate the dead from the living.

See the aftermath of that event in this video.