Last week we wrote about a wild hog killed in Bertie County, N.C. that maxed out a set of 500-pound... 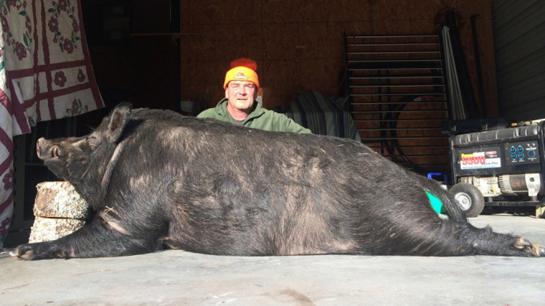 Last week we wrote about a wild hog killed in Bertie County, N.C. that maxed out a set of 500-pound scales. Now a second hunter killed another boar weighing more than 500 pounds during an early morning hunt in Scotland County, N.C.

Hunter Terrell Harris took the hog around 2 a.m. on Saturday, according to WGHP. The hog reportedly destroyed 10 acres of chuffa, and a trail camera captured photos of the boar two nights in a row prior to the hunt. Harris needed several buddies and a winch to load the massive animal onto a trailer. The following day the group processed the hog, which weighed more than 500 pounds according to Harris’ wife.

Feral hogs are regulated by the North Carolina Wildlife Resources Commission in six counties that form the western-most tip of the state. The Commission also reports the average wild hog weighs less than 180 pounds. Both of these huge boars were taken roughly 200 miles away from each other in the eastern part of the state.